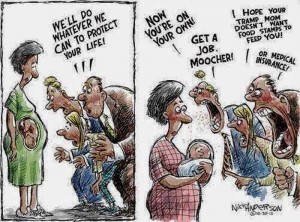 Anti-Choice - this says it all

IT was a blustery day in Washington on Jan. 20, 2009, as it often seems to be on the day of a presidential inauguration. As I stood with my 8-year-old daughter, watching the president deliver his inaugural address, I had a feeling of unease. It wasn’t just that the man who could be so eloquent had seemingly chosen not to be on this auspicious occasion, although that turned out to be a troubling harbinger of things to come. It was that there was a story the American people were waiting to hear — and needed to hear — but he didn’t tell it. And in the ensuing months he continued not to tell it, no matter how outrageous the slings and arrows his opponents threw at him.

…..
Like most Americans, at this point, I have no idea what Barack Obama — and by extension the party he leads — believes on virtually any issue…..

THE real conundrum is why the president seems so compelled to take both sides of every issue, encouraging voters to project whatever they want on him, and hoping they won’t realize which hand is holding the rabbit. ….
….

Read the whole piece it is VERY VERY worthwhile. Compliments to the NYT for publishing such a great piece.
more at…

This expression is one I now try very hard to live by and I believe the American economy would be in a far better place if those of us in business, from main street to Wall Street, would return to this adage.  Today we seem to think any opportunity given (even a morally wrong one) must be taken or we are “suckers” because if “if don’t my competitor will.”

This category will include examples to make this point.  Here’s our first and so far leading contender.

1.  A doctor overseeing the Zadroga 9/11 Health and Compensation Act says cancer will not be covered under the $2.8 billion law due to insufficient scientific evidence linking the disease to toxins at the World Trade Center site.

Doesn’t take too much thinking to figure out why this exclusion exists.  We all know this ruling is the work of the insurance lobby and other business interests.  I could not think of a more suitable example to illustrate my “live by” message.  You have shamed yourself those involved with this action.